Secrets of the Gold by Baer Charlton Blog Tour/Book Review 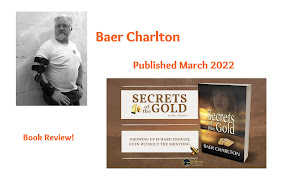 I received a gifted copy and am providing a review.

What Duff knows - He woke up in the dirt and mud with a set of keys in his pocket. The keys belonged to the motorcycle parked a few feet away. His jacket was heavy for some reason. He found other things in the packs on his bike that he had no explanation for.

What Bean knows - She is tired of being in the foster care system after her parents died in quick succession. The cops were chasing her, she ducked into a diner, she essentially took a chance on Duff. Doreen, the waitress, helped, though she didn’t have a clue who Bean was.

Ingrid - After Duff and Bean settled, Ingrid is hired as Bean’s tutor and the housekeeper (so to speak). Ingrid has her own backstory.

Leon - Started out as a security guard in the courthouse building, knew Duff, met Bean, was promoted by sheer luck. A good friend to Duff and Bean.

Mr. Kaminski - A powerful man, though Duff and Bean don’t know why or how exactly Duff came to know him.

The thing about Duff and Bean … they are alike in so many ways, but they didn’t know it when they first met. This tale takes them from the time Bean “met” Duff to the many adventures that followed to the relationship they built that neither one of them expected. Bean has memories she wants to forget, and Duff has memories he wants to remember. They both started out with the same philosophy - pack only what you can carry and leave the rest behind, which amounted to three T-shirts, a pair of pants or two, three pairs of socks, and their shoes. It is only when they settled in a place that Ingrid joined their group, to seemingly tutor Bean, but she is an integral part of their story. Mr. Kaminski and Leon are also an integral part of their story. This is a story about family … even if that family isn’t biologically related. There are some other characters that help round out this story.

To say I enjoyed this book is an understatement and, admittedly, I probably never would have read this book had it not been for Partners in Crime Tours. It is so well written I kept turning pages … wondering if Duff would regain his memories and how Bean would turn out. This is one of those books that you’ll want to put back on your shelf to read today and then maybe in a few years … I suspect your perspective will change over time. If Mr. Charlton’s other books are this intriguing, as readers, we are in for some great storytelling.

Need a proofreader? I’ve got you covered - https://www.melissaproofs.com/