Where They Found Her by Kimberly McCreight Book Review 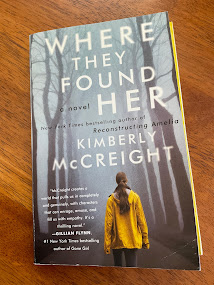 Molly Sanderson is married to Justin, daughter Ella. Molly and Justin have just moved to the neighborhood where Justin is a professor at Ridgedale University and Molly is a reporter for the Ridgedale Reader, not reporting on anything majorly exciting, until she gets a call from Erik. This is the opportunity she has been waiting for to prove herself as a full-on reporter.

Sandy is Jenna’s daughter. Jenna moved her daughter back to the area after hopping around from place to place.

Barbara is married to Steve who is the chief of police. They also have a couple of children, Hannah being their daughter. Hannah is also Sandy’s tutor, having been introduced to each other through Rhea who saw something in Sandy.

This tale is based around what happened to the baby who was found. This is a twisted tale of how the past meets the future in a not-so-kind way. Being an up-and-coming reporter, Molly starts asking questions. The more questions she asks the more she uncovers about a past event that happened in the exact same area. She starts to unravel the truth that has been buried for a long, long time and certain people don’t want the truth to surface.

I enjoyed the twistedness, the little bit of darkness in the telling of this tale. If you haven’t read Ms. McCreight’s work before, give her a try. You won’t be disappointed.