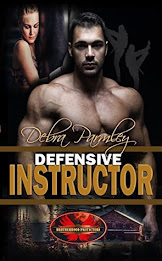 I received this book as a gift.

This is the second book of Mrs. Parmley’s that I have read in the Brotherhood Protector series. In this tale, we are introduced to the Three Cs Ranch, a place that was specifically built out in the middle of nowhere (literally) to shelter abused women and teach them skills to defend themselves. We are introduced to Barrett who is the defense instructor and from the description he’s quite the looker. The first client to arrive at the Three Cs is Chyna Taylor. Chyna has escaped from Phineas (Finn) her abusive ex and is one of the first of a group of women to be housed at the Three Cs. She is joined later by seven others, all with varying backgrounds, but one common theme - their abuse. They are learning to process their feelings with the help of Leah, the resident counselor, and they are also learning self-defense, taught by Barrett. Naturally, there is some powerful attraction between Barrett and one of the eight ladies, which is against the rules of the Three Cs. As remote as this location is in Montana, it’s not quite remote enough.

What I am enjoying, so far, about this series is that they are short novellas that can be read in a few hours, perfect for those folks who are traveling or just do not have time for a longer book, or even someone who is waiting during appointments. There is enough action to keep the reader interested. What I also enjoy is that there is enough heat, enough attraction between the two people involved so as not to be overly in your face, but you know it’s there.